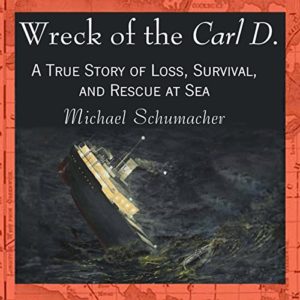 On November 18, 1958, a 623-foot limestone carrier – caught in one of the most violent storms in Lake Michigan history – broke in two and sank in less than five minutes. Four of the 35-person crew escaped to a small raft, to which they clung in total darkness, braving 30-foot waves and frigid temperatures.

As the storm raged on, a search-and-rescue mission hunted for survivors, while the frantic citizens of nearby Rogers City, Michigan, the hardscrabble town that was home to 26 members of the Carl D. Bradley’s crew, anxiously awaited word of their loved ones’ fates.

In Wreck of the Carl D., Michael Schumacher reconstructs the terrible accident, perilous search, and chilling aftermath for the small Michigan town so intimately affected by the tragedy.

“Schumacher covers the ship’s shaky state, the harrowing wreck and risky rescue with assurance and clarity, by profiling the Carl D.’s crew and detailing their lives he gives a human face to the tragedy, infusing the book with dramatic substance to match the riveting narrative.” ( Publishers Weekly)

“Schumacher writes with a steady hand, never letting the drama or emotion of the moment overwhelm the storytelling. A solid and sometimes heartbreaking addition to the maritime-tragedy genre.” ( Booklist)

“Moving this narrative smoothly and vividly through a half-century, the author lays claim to the title of master popular chronicler of Great Lakes shipwrecks. A signal contribution of nautical Americana.” ( Kirkus Reviews)

My Books Are On Audible Here

Looking For Something Specific?